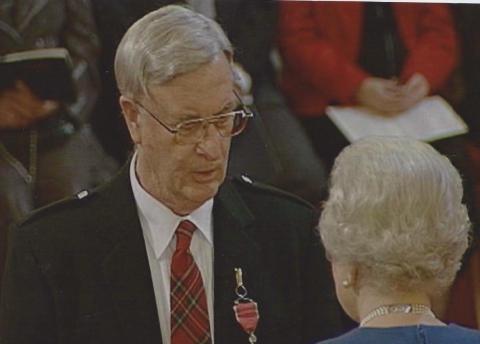 Alfred George Denholm Stewart MBE was born on 26th April 1937. He was educated at Dunfermline High School and the University of Edinburgh, graduating with a BSc in Agriculture in 1958.

After graduating from University he worked as an agricultural adviser with the East of Scotland College of Agriculture until 1973 when he resigned to pursue a career in the building trade.

He enjoyed a highly successful career as a property developer in the Dunfermline area, becoming managing director of Richmond Homes (Scotland) Ltd, before going on to establish futher property development companies.

Throughout his life Alfred Stewart maintained a strong sense of pride in his home town of Dunfermline, and the surrounding area. The Alfred Stewart Property Foundation was created to ensure properties which Mr Stewart had acquired during his career could be used at a future time for the benefit communities in the area.

Mr Stewart's association with Photodynamic Therapy (PDT) began in 1993 when his wife Barbara underwent treatment for cancer at Ninewells Hospital in Dundee. The care Barbara received greatly enhanced her quality of life and inspired the creation, in 1999, of the Barbara Stewart Trust to fund research into PDT and led to the creation of the Scottish PDT Centre at Ninewells.

Click here for more information on the Scottish PDT Centre.

In recognition of his work with the Barbara Stewart Trust, Mr Stewart was awarded an MBE in the Queen's Birthday Honours List of 2007 (pictured, right).

The Trust is a charitable organisation which was established by Alfred Stewart in his Will to fund or support medical research and other charitable activities.

The Trust currently provides the main funding for the Scottish Photodynamic Therapy (PDT) Centre at Ninewells Hospital in Dundee.

To find out more about the Alfred Stewart Trust click here.